Yule, or the Winter Solstice is a Pagan holiday that is celebrating the rebirth of the sun. On the day of the solstice (December 21st), it is the longest night of the year, and is referred by some as a "Solstice Night". On the night of the Yule, Celtic Pagans celebrated with sun Gods such as Lugh who was reborn to join his wife. (Horus, Amun Ra/Marduk could be used as examples in Satanism).

** Most of the writings in this article will be taken from other websites which will be cited. I have found the following articles to he very helpful when describing the Holiday of Yule**

•••Both of these celebrations show how the Ancient pagans had a strong tie with honoring the solstices through out the year. The winter solstice bringing about the return of the sun and longer days and a celebration of the survival of cold winter months.
Over the evolution of paganism, these legends have developed into various rituals and observations. One of the more detailed or organized observations is closely related to the Celtic legend of Lugh, Eriu and the 12 Days of Yule.
The festivals are observed from sunset to sunset -
Dec. 20 to Dec. 23. During the 1st 3 days -
The virgin Maiden Goddess is honored as your guide for moving forward into the new year, to set you on the right and positive path.
Dec. 23 to Dec. 26. The 2nd set of 3 days -
The Mother Goddess is honored for fertility and all your coming endeavors.
Dec. 26 to Dec 29. The 3rd set of 3 days -
These 3 days are set aside for the rebirth of the God, and honoring his guidance through the physical world.
Dec. 29 to Jan. 1. -
The last 3 days are set aside for the Old Crone Goddess who is honored for wisdom and as your teacher into the cosmic lessons of life and spirit. In modern times, under the solar calendar, she might also be honored as the waning year giving way to the new year.Other pagans had similar traditions¹:
Not having evergreen trees, the ancient Egyptians considered the palm tree to symbolize resurrection. They decorated their homes with its branches during the winter solstice.
"The first decorating of an evergreen tree began with the heathen Greeks and their worship of their god Adonia, who allegedly was brought back to life by the serpent Aessulapius after having been slain."
The ancient Pagan Romans decorated their "trees with bits of metal and replicas of their god, Bacchus [a fertility god]. They also placed 12 candles on the tree in honor of their sun god". Their mid-winter festival of Saturnalia started on December 17th and often lasted until a few days after the Solstice.
In Northern Europe, the ancient Germanic people tied fruit and attached candles to evergreen tree branches, in honor of their god Woden. Trees were viewed as symbolizing eternal life. This is the deity after which Wednesday was named. The trees joined holly, mistletoe, the wassail bowl and the Yule log as symbols of the season. All predated Christianity.
- TAKEN FROM  Paganspath.com

••• Bonfires were lit in the fields, and crops and trees were "wassailed" with toasts of spiced cider.  Children were escorted from house to house with gifts of clove spiked apples and oranges which were laid in baskets of evergreen boughs and wheat stalks dusted with flour. The apples and oranges represented the sun.  The boughs were symbolic of immortality (evergreens were sacred to the Celts because they did not "die" thereby representing the eternal aspect of the Divine). The wheat stalks portrayed the harvest, and the flour was accomplishment of triumph, light, and life. Holly and ivy not only decorated the outside, but also the inside of homes, in hopes Nature Sprites would come and join the celebration. A sprig of Holly was kept near the door all year long as a constant invitation for good fortune to visit tthe residents. Mistletoe was also hung as decoration.  It represented the seed of the Divine, and at Midwinter, the Druids would travel deep into the forest to harvest it.
The ceremonial Yule log was the highlight of the Solstice festival. In accordance to tradition, the log must either have been harvested from the householder's land, or given as a gift... it must never have been bought. Once dragged into the house and placed in the fireplace it was decorated in seasonal greenery, doused with cider or ale, and dusted with flour before set ablaze by a piece of last years log, (held onto for just this purpose). The log would burn throughout the night, then smolder for 12 days after before being ceremonially put out. Ash is the traditional wood of the Yule log. It is the sacred world tree of the Teutons, known as Yggdrasil. An herb of the Sun, Ash brings light into the hearth at the Solstice.
Symbolism of Yule:
Rebirth of the Sun, The longest night of the year, The Winter Solstice, Introspect, Planning for the Future.
Symbols of Yule:
Yule log, or small Yule log with 3 candles, evergreen boughs or wreaths, holly, mistletoe hung in doorways, gold pillar candles, baskets of clove studded fruit, a simmering pot of wassail, poinsettias, christmas cactus.
Herbs of Yule:
Bayberry, blessed thistle, evergreen, frankincense holly, laurel, mistletoe, oak, pine, sage, yellow cedar.
Foods of Yule:
Cookies and caraway cakes soaked in cider, fruits, nuts, pork dishes, turkey, eggnog, ginger tea, spiced cider, wassail, or lamb's wool (ale, sugar, nutmeg, roasted apples).
Incense of Yule:
Pine, cedar, bayberry, cinnamon.
Colors of Yule:
Red, green, gold, white, silver, yellow, orange.
Stones of Yule:
Rubies, bloodstones, garnets, emeralds, diamonds.
Activities of Yule:
Caroling, wassailing the trees, burning the Yule log, decorating the Yule tree, exchanging of presents, kissing under the mistletoe, honoring Kriss Kringle the Germanic Pagan God of Yule
Spellworkings of Yule:
Peace, harmony, love, and increased happiness.
Deities of Yule:
Goddesses-Brighid, Isis, Demeter, Gaea, Diana, The Great Mother. Gods-Apollo, Ra, Odin, Lugh, The Oak King, The Horned One, The Green Man, The Divine Child, Mabon.
- TAKEN FROM Wicca.com

••• Yule is deeply rooted in the cycle of the year, it is the seed time of year, the longest night and the shortest day, where the Goddess once again becomes the Great Mother and gives birth to the new Sun King. In a poetic sense it is on this the longest night of the winter, 'the dark night of our souls', that there springs the new spark of hope, the Sacred Fire, the Light of the World, the Coel Coeth.
Fire festivals, celebrating the rebirth of the Sun, held on the Winter's Solstice can be found throughout the ancient world. The Roman festival of Saturnalia was held on the winter solstice, boughs of evergreen trees and bushes would decorate the house, gifts where exchanged and normal business was suspended. The Persian Mithraists held December 25th as sacred to the birth of their Sun God, Mithras, and celebrated it as a victory of light over darkness. In Sweden, December 13th was sacred to the Goddess Lucina, Shining One, and was a celebration of the return of the light. On Yule itself, around the 21st, bonfires were lit to honour Odin and Thor.
The festival was already closely associated with the birth of older Pagan gods like Oedipus, Theseus, Hercules, Perseus, Jason, Dionysus, Apollo, Mithra, Horus and even Arthur with a cycle of birth, death and resurrection that is also very close to that of Jesus. It can hardly be a coincidence that the Christians, also used this time of year for the birth of Christ, mystically linking him with the Sun.
That Yule is another fire festival, should come as no surprise, however unlike the more public outdoor festival of the summer solstice, Yule lends itself to a more private and domestic celebration. Yet like its midsummer counterpart, is strongly associated with fertility and the continuation of life. Here the Goddess is in her dark aspect, as 'She Who Cuts The Thread' or 'Our Lady in Darkness', calling back the Sun God. Yet, at the same time, she is in the process of giving birth to Son-Lover who will re-fertilise her and the earth, bringing back light and warmth to the world.The origin of the word
Yule, has several suggested origins from the Old English word, geõla, the Old Norse word jõl, a pagan festival celebrated at the winter solstice, or the Anglo-Saxon word for the festival of the Winter Solstice, 'Iul' meaning 'wheel'. In old almanacs Yule was represented by the symbol of a wheel, conveying the idea of the year turning like a wheel, The Great Wheel of the Zodiac, The Wheel of Life. The spokes of the wheel, were the old festivals of the year, the solstices and equinoxes.
The winter solstice, the rebirth of the Sun, is an important turning point, as it marks the shortest day, when the hours of daylight are at their least. It also the start of the increase in the hours of daylight, until the Summer Solstice, when darkness becomes ascendant once more.
- TAKEN FROM Thewhitegodess.Co.uk

Posted by Unknown at 9:22 AM No comments: 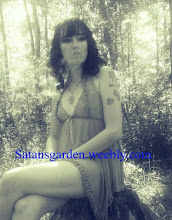